As the exoskeleton industry grows, so does its recognition.  In the first half of 2017 Ekso Bionics and suitX have both been recognized with awards for their exoskeleton development.

In April 2017, Ekso Bionics announced that it has been awarded the 2016 Telehealth Award from HealthTechZone.com, a leader in healthcare news.  The award recognizes vendors with a proven track record of improving health care.  The award was granted for the EksoPulse, a software platform that merges the medical EksoGT with Vodafone’s wireless technology. 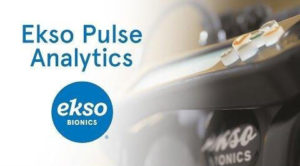 EksoPulse is a cloud-based computing and communications platform uniquely engineered for the EksoGT and physical therapists.  It effectively combines rehabilitation robotics with the cloud and big data.  Through it, rehabilitation specialists can capture each patient’s progress with their exoskeletons, down to each individual step.  The EksoPulse is a big step forward for the entire exoskeleton industry.  BionikLabs and Indego have also announced plans to integrate their rehabilitation systems to the cloud using some form of wireless communications technology.  All of the user data is fully protected and complies with regulations for medical patient privacy.

This May, suitX was voted the Gold Winner for innovation at the 2017 Edison Awards held in New York City.  The award recognizes the company’s efforts for the development of the MAX industrial exoskeleton and its modules, backX, legX and shoulderX.  The MAX is a passive exoskeleton that reduces the strain and stress on worker’s bodies.  The suit is designed to decrease the wear and tear on laborer’s bodies over the long run.  The exoskeletons target the body areas most prone to injury and fatigue: the lower back and knees.  The suitX products are fully compatible with already existing (and often mandatory) safety harnesses.  Variations of the backX can be attached either directly to the user or alternatively to the user’s safety harness.  It is envisioned that one-day industrial exoskeletons will become common personal protective equipment (PPE) at warehouses, manufacturing, construction, medical (lifting of patients), and agricultural sites.

The above are not the only exoskeleton awards.  As we have previously reported in our Oct-Nov 2016 News, ITRI and the Wyss Institute have also been recently recognized for their work.

The Industrial Technology Research Institute (ITRI) has won an award for their work on the wearable walking assistive exoskeleton robot 2WA-EXO.  The R&D Magazine has honored the best 100 innovations in research and development for the last 50 years.

No stranger to the exoskeleton industry, the mastermind behind the Wyss Institute’s Soft Exosuit, Dr. Conor Walsh, has received the Rolex Award for Enterprise.  In addition, Rolex has produced one of the best videos to date on the subject of assistive exoskeletons (below).  In June, ReWalk and Wyss announced a collaboration to market the soft exosuit for individuals with movement impairments.  The Rolex video shows clearly how the Wyss team has taken their original focus to augment able-bodied individuals into this new direction.  You can read more on the Rolex Award on the Wyss Institute website.

Congratulations to all labs and companies receiving exoskeleton awards.