The 2019-2020 ski season offers a greater variety for knee and low back pain relief than ever before!  This year, there are three ski exoskeletons that are available to purchase or rent in addition to a fourth new entry into this growing market space.  Between the four developers of the Ski~Mojo, Againer, Elevate, and Xnowers, those willing to try a wearable have more access to ski exoskeletons versus any prior year.  (A choice that many skiers have not been able to make as multiple ski resorts have shut down due to COVID-19)

According to the websites of each exoskeleton developer, their devices in the 2019-2020 ski season can be found in: 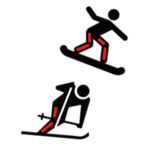 It is difficult to track exoskeleton proliferation.  Military exo development and evaluation is secretive, with most of the information residing outside of the public domain.  Numbers of industrial and medical exoskeletons are readily available from the publicly traded exo companies, but they supply only a fraction of all the wearables in use.  In comparison, the total number of consumer exoskeletons is still fewer in numbers but are offered directly to the potential end-users.

“How do we make the most good?” – asks Tim Swift, CEO of Roam Robotics during an interview for the Exoskeleton Report.  “The most good happens when you touch the most people.  And the first place that you can do that is you can reach people at a consumer scale that you can’t in other markets.”

While there are some major differences between each of the four ski exoskeletons, their goal is to reduce pain and fatigue and to allow skiers to stay on the slopes for longer (and potentially safer too).  For more information on this type of wearables, please refer to our article: The Allure of Ski Exoskeletons (2018).