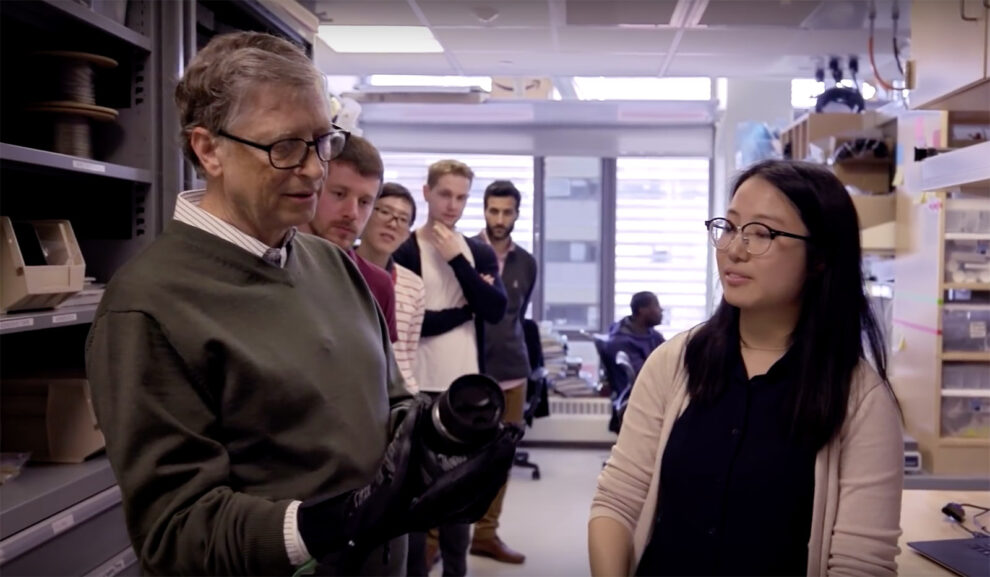 At the start of the year, Bill Gates decided to pay a visit to the Wyss Institute for Biologically Inspired Engineering at Harvard.  From the point of view of exoskeleton development, the Wyss Institute is best known as the birthplace of numerous cable and inflatable driven exosuits under the guidance of Dr. Conor Walsh.

By blogging and recording his encounter with the exosuits from the East Coast, Bill Gates has introduced wearable robotics to tens of thousands of his online followers.  Bill had three notable observations:

In addition to observing robots in action, Bill also personally demoed at least one exosuit: an inflatable soft robotic glove for grip strength augmentation (inflatable gloves being an entire subclass of exosuits).  It is truly wonderful that Bill had the opportunity to do a hands-on demo as no amount of description can really substitute the experience of physically trying out an exoskeleton device.

It is easy to sometimes feel a little cynical and think that exoskeleton research labs create just enough innovation to stay funded for another year without having a practical impact on the world.  While not the case with the exosuits from the Wyss Institute, this perception can sometimes be fueled by overzealous commercial developers who forget to mention the source of origin for their wearables.  Unfortunately, the internet is filled with press releases of commercial exo prototypes that omit the research labs that were the point of origin for the technology.

The Wyss Institute is working on medical, industrial and military applications for its inflatable and cable-driven exosuits:

ReWalk Robotics, the developer of the ReWalk 6.0 exoskeleton is working directly with the Wyss Institute on creating a commercial exosuit for medical rehabilitation.  Before becoming commercially available, the product will have to receive a CE certification mark and FDA approval, both of which are already in the works.

It was revealed yesterday on the U.S. Army’s website that in addition to the preliminary interest and evaluation contract for the ONYX developed by Lockheed Martin the Army is also interested in the ExoBoot by Dephy Inc.  The Dephy ExoBoot, developed by the MIT Media Lab, is the first (but not the only) ankle exoskeleton to show a net reduction in metabolic cost.

There is another ExoBoot, a Soft Inflatable Robotic Boot to Assist Ankle During Walking designed by Dr. Conor Walsh and additional Wyss Institue members (it’s a small world).  The Wyss ExoBoot is essentially an inflatable actuator integrated into a boot that is timed to inflate and provide augmentative torque with each step, roughly at the time of heel lift.  It would be interesting to see how the two perform in a side-by-side comparison.

Exosuits are becoming more popular for back support and lift assist.  One of the main reasons is that they are smaller than their exoskeleton counterpart and can potentially easily fit and be integrated with any mandatory safety clothing, harnesses, and equipment.  In addition, the smaller profile makes the device less likely to snag or interfere while working in tighter spaces.

Whether it is grip assist for the hand, elbow flexion, supporting the shoulder, or activating while walking or lifting, exosuits have the potential to augment the user’s existing capability or assist with restoring a lost one.

In addition to examining all of the exosuits, Bill Gates also came face-to-face with miniature bio-inspired flying robots and soft grippers.  Read all about it at GatesNotes: Bots, Britches and Bees.