In the United States alone, the economic impact of on-the-job back injuries is estimated to exceed $100 billion annually, with the average cost of back injury-related workers’ compensation claims falling between $40,000-$80,000 per incident. Beyond these massive financial consequences for employers, employees and insurance companies lie the non-economic societal and individual impacts that result from long-term or even permanent disability and employees having to cope with chronic pain.

Back injuries are the second most common reason for non-attendance at work, after the common cold, but they require far more time to heal; a 2015 survey by the Bureau of Labor and Statistics found that musculoskeletal disorders (MSDs) have a median healing time of 12 days of recuperation, compared to a median time of eight days for all types of injury. Overexertion during lifting is the single greatest cause of MSDs, though trips, slips, and falls are also common. One study suggested that more than 26 million Americans each year suffer from an occupational back injury.

Companies like Sarcos are developing powered, full-body robotic exoskeletons that will significantly reduce job-related injuries, while augmenting worker strength, endurance and precision to boost productivity. Precision, in this context, refers to how well a task is executed. As we tire, our ability to hit the same spot on a target or to perform a task in the correct manner decreases (baseball teams use relief pitchers for precisely this reason). An exoskeleton, by contrast, can help a worker perform a task with great precision each and every time. By transferring all of the load of both the robot and its payload through the robot to the floor, we can completely offload the worker while also protecting the worker from making motions under load that could be harmful during a given task. This approach allows us to mitigate the two situations that cause a great many injuries: lifting something that is too heavy and lifting something in the wrong way. By addressing these two problems, we can also address a related economic issue: lost productivity due to worker fatigue, even when that fatigue doesn’t directly cause an injury. This approach also allows us to avoid simply shifting stress and strain from one part of the body to another.

The “limit” for human lifting is often set at 40 lbs., and the “limit” for two workers lifting in tandem is often 60 lbs. In many industrial facilities, there are a tremendous number of objects that weigh between 40 and 200 lbs., that are repeatedly moved from one location to another. Forklifts, other rolling vehicles, and overhead cranes are the most common means for moving an object that weighs more than what an individual should lift in an industrial or commercial setting from one location to another. According to OSHA statistics, there were 96,785 forklift-related injuries in 2015. With an estimated 855,900 forklifts in the United States as of that date, that means slightly more than one in 10 forklifts were involved in an industrial accident. 34,900 of those accidents were classified as serious, despite the fact that forklifts have been in use for decades and are designed with safety features like horns, back-up alerts, and sirens. Entire plants across the country are laid out in a manner intended to minimize the chance of a forklift accident, yet serious accidents occur on a daily basis. In the not-so-distant future, these sub-200 lb. activities will instead be handled by a worker paired with an exoskeleton, which will fundamentally reduce the number of these forklift-induced injuries.

There’s an intrinsic tension between building factories that can handle the high manufacturing volumes and heavy equipment of modern manufacturing and building workplaces that are designed to be human scaled and sensitive to human physical tolerances. An exoskeleton can resolve this tension by giving ordinary people access to an assistive system designed to reliably and repeatedly lift up to 200 lbs., without any exertion, strain, or injury, while reducing and sometimes eliminating the need to use heavy machinery like forklifts in certain situations.

The 200 lb. lift capacity of a full-body robotic exoskeleton like Sarcos’ Guardian XO is large enough to potentially prevent thousands of injuries per year. A nurse or orderly with access to an exoskeleton could handle the physically demanding job of caring for and lifting patients without worrying about the wear and tear this critical task inflicts on their own body. Employees filling orders in an e-commerce warehouse could pack boxes and prepare shipments without constantly relying on forklifts to move quickly through the facility and are at less risk of injury to themselves or others. Moving a crate of parts from one side of the factory floor to another goes from a two-person job or forklift requirement to a single-person task without requiring an additional piece of heavy equipment to safely handle the load. Additionally, a human operator paired with an exoskeleton can allow for far greater manufacturing agility when compared to fixed-in-place robots that are designed and programmed to only perform a single task.

Powered full-body exoskeletons present a rare opportunity to improve the workplace in multiple respects at once. Employers benefit from reduced employee downtime and increased productivity. Employees benefit from reduced injury rates, less physical wear and tear on their own bodies, and potentially greater longevity in their careers. In the long term, being able to move more weight in a safe manner without relying on larger pieces of industrial equipment will allow companies to improve their space utilization and optimize work areas for quicker, more agile production. And the overall cost savings will be substantial. Combining human intelligence, instinct and judgment with robotic strength, endurance and precision is a 2+2 equals 7 equation – the combination yields a result that neither human nor machine could deliver on its own and allows for the reintroduction of workers into what has in many cases become a mechanized and automated workplace. You can expect to see this “workplace of the future” begin to evolve within the next few years, and it truly will be transformational. 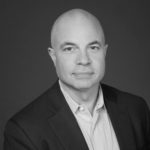 Ben Wolff serves as the Chairman and CEO and is the largest shareholder of Sarcos Robotics. In this role, he oversees the strategic direction of the company and engages with the company’s partners, customers and investors. Sarcos is revolutionizing a myriad of industries by deploying mobile, dexterous tele-operated robots that combine human intelligence, instinct and judgment with the strength, endurance and precision of machines to create the safest, most productive and cost-effective work force in the world.