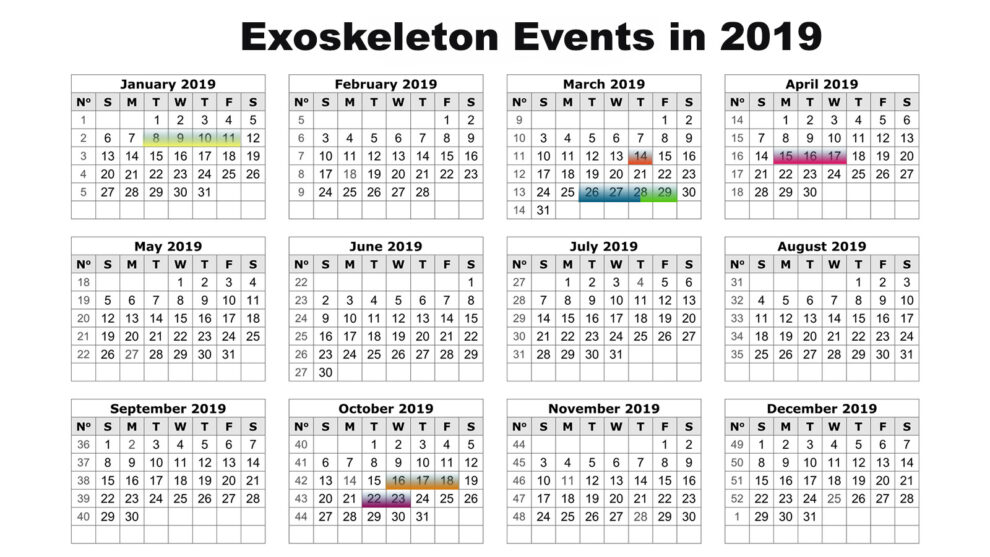 Are you interested in wearable robotics, powered clothing, user assistive and augmentative devices or the application of wearable sensors?  Then don’t miss these upcoming exoskeleton related events in 2019:

The largest consumer electronics trade show will feature at least two dedicate exoskeleton companies this year, SkelEx and Laevo.  In addition, exoskeleton developers and parts suppliers like Honda and Harmonic Drive will also be there.

Furthermore, Seismic, the Menlo Park developer of Powered Clothing™ based on SRI’s SuperFlex will also make their first appearance at CES.  While not confirmed, it is very likely LG will also showcase their new CLOi SuitBot.  This year, expect the Las Vegas consumer electronics show to have more wearable robotics than ever before.

The XoSoft consortium will be hosting a one-day Exoskeletons and Soft Wearable Robotics Day. The event will feature live demonstrations of multiple exoskeletons and prototypes in action, keynote talks held by experts in the field of wearable robotics and pitches from five EU funded wearable robotics projects.  Stakeholders from industry and academia will be present and eager to discuss potential opportunities.  Registration: https://www.xosoft.eu/clusterday.html

Join us at the fourth annual largest wearable robotics conference in the world.  Meet and greet exoskeleton experts and see for yourself what is at the very cutting edge of wearable robotics technology.  This year’s keynote presenters include Hugh Herr – MIT MediaLab (“people aren’t disabled, technology is disabled”) and Robert Riener – ETH Zurich Sensory-Motor Systems Lab.  WearRAcon19 will also once against host the WearRA Innovation Challenge.  Registration: http://www.wearablerobotics.com/wearracon-19/registration/

This year’s first ASTM face-to-face standardization meeting will be held in conjunction with WearRAcon19.  Discussions will include creating standards for exoskeleton terminology, information security, labeling, design and manufacturability, human factors and ergonomics, performance and environmental considerations, and maintenance and disposal.  Learn more at https://www.astm.org/COMMIT/SUBCOMMIT/F48.htm

4th Integration of the Exoskeleton in the Battlefield Workshop, April 15 – April 17, Trenčín, Slovakia

The 4th IEB WS will be held 15 – 17 April 2019 in Trencin, Slovakia. The activity is to be organized as trials and writing sessions and also will provide the opportunity to demonstrate exoskeleton systems. More information: https://www.eodcoe.org/en/technology-dept/4th-integration-exoskeleton-battlefield-workshop/

The International Symposium on Wearable Robotics Conference (WeRob 2019) will be held for the second time in Houston, Texas, USA.  In the 2019 edition, WeRob will not only highlight applications in rehabilitation but will also expand the role of wearable robots in promoting healthy aging and safety in the workplace. There will be interactive workshops with engineers, clinicians and end users to promote collaboration among different disciplines.  The Symposium will showcase a product theater demonstrating the latest in wearable exoskeletons and robots.

The International Exhibition and Conference for Exoskeleton & Human Augmentation Systems, or Exo Berlin for short, runs concurrently with the Technology Conferences under the center topics related to manufacturing, technology and applications.  The focal topics of the exhibition include (but are not limited to) exoskeletons, wearable robotics, intelligent prosthetics, human-robot collaboration, mechatronic systems, and functional components and materials.  For much more, visit: https://www.exo-berlin.de/#

As more related events become announced, expect them to be added at the Exoskeleton Events Calendar.