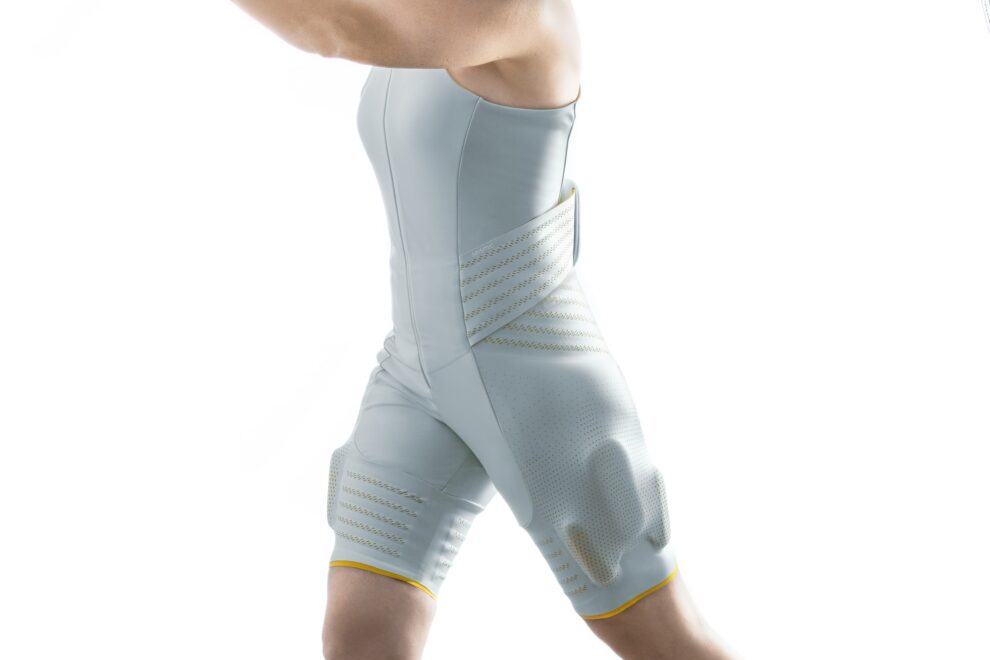 Rich Mahoney, CEO an Co-founder of Seismic, originally hails from SRI’s robotics research program.  He sees Seismic’s Powered Clothing, not as an exoskeleton or even a powered suit, but fashionable clothing fused with robotics and sensor technology.

The technology behind the Seismic’s Powered Clothing is based on the DARPA funded Warrior Web Project.  SRI International developed the SuperFlex suit, an ingenious exosuit that utilized motors that require minimum gear reduction (saving space, reducing heat, and decreasing power consumption) and a carefully crafted garment that can distribute forces equally around the leg.  The SRI team even visited acrobats and silk rope climbers to learn how the ropes don’t cut into the arms and legs of the performers.

In 2017, the world had another sneak peek of the technology in the form of the Aura Powered Body Suit.  The ankle powered component was gone, and the design was focused entirely on producing a force at the hips.  The main application at the time was centered around sit-to-stand and stair climbing for the elderly and those suffering from muscle weakness.

What the Seismic Powered Clothing gets right:

Powered Clothing is the most ambitious commercial exosuit project of all time and it has the technology and the target demographic to back it up.

Creating exosuits that are fully merged with the user’s clothing is not a new or unique idea to Seismic.  Seismic, however, appears to be by far the closest to making a successful commercial product of this kind: active powered force assistance fused into the user’s clothing.

The Powered Clothing made its first official appearance at TechCrunch Disrupt, followed up by this year’s Las Vegas Consumer Electronics Show.  Sarah Thomas, the lead partnership strategist for Seismic, led a talk on the future of wearables and fashion. “For a deep sense of delight, you need to have functionality, reliability and usability.”  Also while at CES, the company announced four strategic partnerships that aim to penetrate the construction and health and wellness industries (read the official press release here).

Seismic is indeed attempting to make a seismic shift and it has had a fascinating journey from the SRI robotics engineering labs to CES 2019.